Neeraj Sharma with 5 years of working experience in Teradata Dba etl and obiee.. Worked with top companies like Amazon, Teradata and currently working wit my Siemens., Working on learning and getting my hands into big data dev and aws... Love working out, love playing basketball and meeting people..

INTRODUCTION TO TERADATA AND ITS OFFERINGS

Teradata is a RDBMS database system from Teradata Corporation programmed and built to handle large and intensive data warehousing applications. Teradata is scalable, massively parallel (MPP) and has a shared nothing architecture that helps in speedy processing of queries accessing a large footprint of data.

Teradata is built to handle large data warehousing operations and does not support OLTP operations as well as it does OLAP.

How is Teradata different from other databases :

Teradata has a shared nothing architecture which essentially means the data distribution is in such a way that each logical unit of work falling in different parts of virtual storage are handled independently of each other thereby ensuring massive parallelism.

Oracle introduced Exadata as their OLAP system to compete with Teradata however arguably Teradata still has a better performance of handling large volumes of data.

A high level architecture of Teradata is as below: 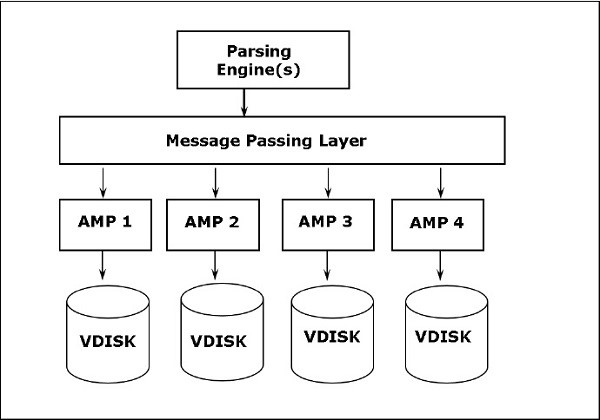 Parsing Engine is the gateway to Teradata which basically accepts connections and requests from user and parses it, optimizes it , creates and execution plan and sends over the steps to Message Passing Layer.

Message Passing Layer, otherwise known as Bynet takes care of passing the instructions from PE over to different AMPs. It is important to know that all the data that is stored over Teradata is distributed across different AMPs that have their own virtual hard disks. The distribution is almost identical or in some cases not. The distribution takes places based on a hashing algorithm that we will look into in future articles.

Once the MPL has sent the instructions over to the AMPs, AMPs are the workhorses of Teradata i.e. they carry out the tasks on the data. All the instructions sent out to MPL by PE are executed one by one by AMPs on their own share of data independently of other AMPs (shared nothing). Once all amps have finished their unit of work, the final result is returned to the user. This is MPP that makes Teradata famous thereby giving high performance and throughput.

Teradata can handle large volumes of data which sometimes was earlier referred to as big data. So Teradata had another product named Teradata Aster which is basically big data of relational databases. Aster was capable of doing mapreduce over relational data over MPP systems. 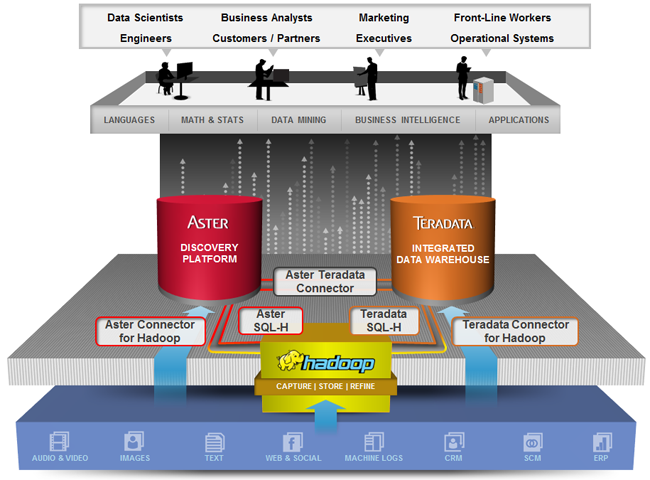 Aster to Hadoop etc. The above is a high level view of Teradata’s UDA offering.

Cloud computing being the need of the hour with low maintenance costs when compared to on premises systems and high scalability options, Teradata has introduced their Cloud offering also known as Teradata IntelliCloud. Intellicloud is available either on AWS or as a separate Teradata Managed Cloud offering.

They also introduced a new architecture called as Intelliflex which is a hybrid on premise TD managed cloud infrastructure in Teradata Partners Conference 2016 which allows critical data to be placed on premise and other data being placed on Managed Cloud. Below is an image outlining the same. 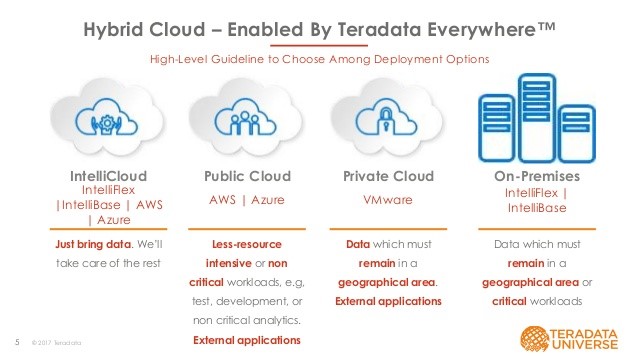 This is all about what Teradata is , a high level architecture and the offerings of Teradata. We will look into more and deep dive into individual architectural components on future articles.

5 thoughts on “Teradata : INTRODUCTION TO TERADATA AND ITS OFFERINGS”