This is Sridhar Y. I have Around 10 years of experience as Microsoft SQL Server DBA and exposure to Database Migration/Upgradation Activities, Configure High Availability and Disaster Recovery solutions like Log Shipping,Database Mirroring,Replication,Clustering ,Always ON Availability groups and expert in performance tuning and troubleshooting.

In this article, we will learn about SQL SERVER –Transparent Data Encryption (TDE)

When SQL Server 2008 was introduced, Microsoft implemented Transparent Data Encryption (TDE).  When TDE is enabled on a database SQL Server will encrypt the database as data is written to the disk.  Additionally, when data is read from disk it will be unencrypted.  When data is in memory is it is in an unencrypted format.

One more advantage with TDE, database backups will also be encrypted. In the event that a backup of the database gets lost or stolen, the culprit will not be able to restore the database without the appropriate certificate, keys and passwords

Below are the sequence order steps to implement TDE 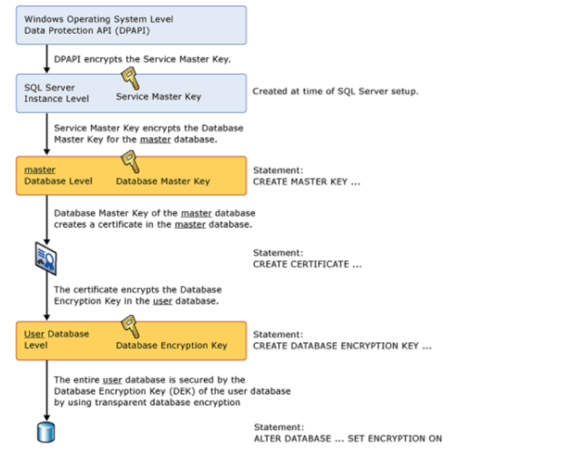 Steps to implement TDE for database

Here I am using DB name as Testing

Now TDE implemented on Testing database and using below script we can check on which database TDE is enabled.

You can get the result as below

— Execute below query to find the name of the certificates

We will get below result

How to restore database backup on other instance which TDE enabled

2.Restore TDE Certificate on other instance

Now you can restore the database after restoring certificates.

How to Remove TDE

1.Disable TDE on the affected databases