In this article,we will see Brief Introduction on Git.

SCM stands for Source Code Management is an integral part of any development project in the current IT world.

Source Code Management tools are the crucial ones that make or break the effort put in by multiple developer.

A version control system (VCS) allows you to track the history of a collection of files.

It supports creating different versions of this collection.

Each version captures a snapshot of the files at a certain point in time.

VCS allows you to switch between these versions.

The concept of a centralized system is that it works on a Client-Server relationship.

The repository is located at one place and provides access to many clients.

Centralized Version Control Systems were developed to record changes in a central system and enable developers to collaborate on other systems.

Relatively easy to set up

If the main server goes down, developers can’t save versioned changes

If the central database is corrupted, the entire history could be lost (security issues)

Git is an example of a distributed version control system (DVCS).

DVCSs allow full access to every file, branch, and iteration of a project.

Allows every user access to a full and self-contained history of all changes.

Each user has a complete local copy of a repository on his individual computer.

The user can copy an existing repository.

This copying process is typically called cloning and the resulting repository can be referred to as a clone.

Every clone contains the full history of the collection of files

Cloned repository has the same functionality as the original repository. 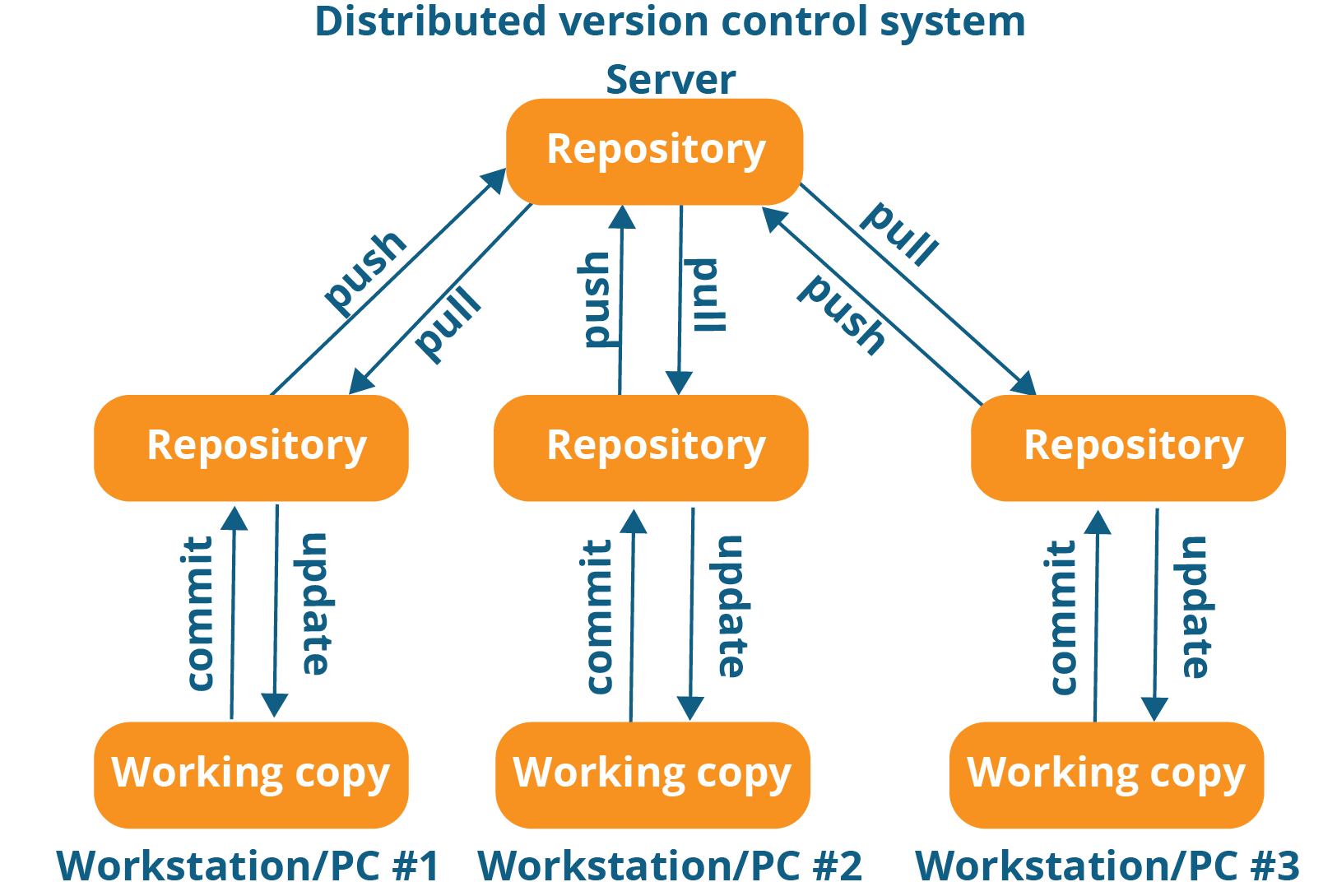 Because of local commits, the full history is always available

Ability to push your changes continuously

Good for projects with offshore developers 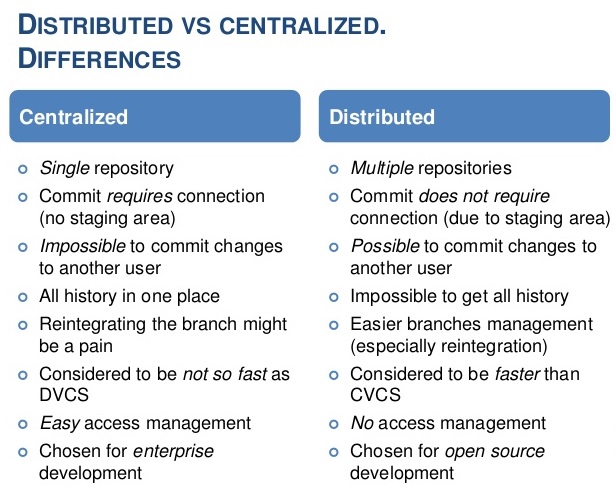 Git is currently the most popular implementation of a distributed version control system.

Git is commonly used for both open source and commercial software development, with significant benefits for individuals, teams and businesses.

Git originates from the Linux kernel development and was founded in 2005 by Linus Torvalds.

Nowadays it is used by many popular open source projects, e.g., the Android or the Eclipse developer teams, as well as many commercial organizations.

The core of Git was originally written in the programming language C.

Git has also been re-implemented in other languages, e.g., Java, Ruby and Python.

Git is a free software distributed under the terms of the GNU General Public License version 2.

According to the latest Stack Overflow developer survey, more than 70 percent of developers use Git.

A Git repository contains the history of a collection of files starting from a certain directory.

The process of copying an existing Git repository via the Git tooling is called cloning. After cloning a repository the user has the complete repository with its history on his local machine.

Where you can modify the files.

All local repositories are Non-Bare Repositories.

Multiple branches at a time unlike SCM tools.

Backup is available in multiple locations.

Each work space will have its own repo internally.

Can create any no of branches.

Get any previous version (Backup).

Represents some data of particular time.

Stores the changes (appended data) only. Not whole copy.

Store changes in repository (Will get commit ID).

Even if you change one dot, commit ID will changed.

In Git we called as Repository.

It is a storage where we store our code.

It is a place where you work like create files, write code etc.

Where you can see files physically and do modifications.

Product is same, so one repository but different tasks.

Each task has one separate task.

We can create any number of branches.

Changes are personal to that particular branch.

We can put files only in branches ( not in repository directly).

The default branch is “Master”.

Files created in workspace will be visible in any of the branch workspace until you commit.

Once you commit, then  that file belongs to that particular branch.

Index is an alternative term for the staging area.

The working tree contains the set of working files for the repository. You can modify the content and commit the changes as new commits to the repository.

Sending the files from staging area to local repository that process we called commit.

Whenever you commit, you will get one commit ID.

It is reference to identify each change and who did that change.

It contains complete information regards to who has committed.

It is a meaning full name.

Whenever you commit, you will get one commit ID.

For easier understanding we give tag for the commit ID.

It is a place where you work like create files, write code etc.

Where you can see files physically and do modifications.

The file has been added to git’s version control but changes have not been committed.

The file has been added to git’s version control, it will take snapshot (Incremental) immediately.

The file is not tracked by the Git repository. This means that the file never staged nor committed.

committed and not staged

The file has been added to git’s version control but changes have not been committed.

The change has been committed.

2 thoughts on “Introduction to Git”